Why Jamstack is great for SMB and Enterprise

Learn how Jamstack how help your business today 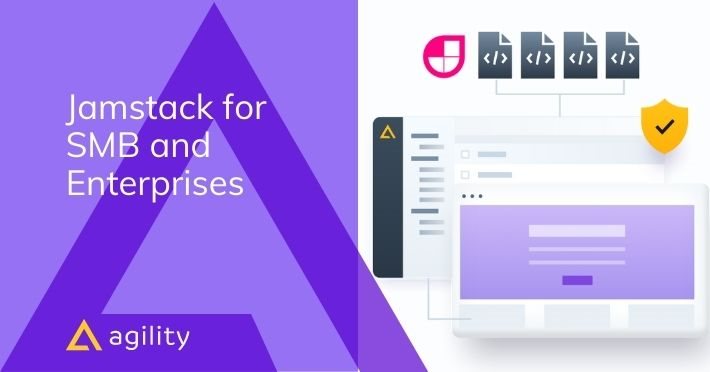 Jamstack first emerged as a set of technologies aimed at developers. It gave them a whole new methodology for building websites with a multitude of benefits. As Jamstack has matured, we've seen those benefits translate directly to the businesses' bottom line among organizations adopting these architectures.

Let's explore those benefits and how they might relate to your business.

Jamstack first became popular among developers building smaller websites proof-of-concept projects. Chief among these were ad campaigns, online conferences and landing pages. Teams could build out these projects quickly and easily, not just because they were smaller in scope but also because the tooling was better. Since Jamstack is built primarily with Javascript, HTML and CSS, more developers can be productive right away. In addition, the DevOps pipelines are largely taken care of with hosting platforms such as Netlify and Vercel: teams can simply point to their source control repo, and the website is deployed live and available on a CDN within moments.

What these organizations found with their proof-of-concept projects astounded them.

What They Found: Jamstack benefits

The benefits of Jamstack became immediately apparent to the businesses that first adopted it.

First of all, performance became a non-issue, essentially. Previously, these teams had experienced outages on landing pages when tied to marketing campaigns. Now, these pages performed incredibly well, even when dealing with massive bursts of traffic.

Jamstack websites use a build process to deliver dynamic content using static files. As a result, each website has a much smaller security footprint with far fewer attack vectors.

In short, teams found that their Jamstack sites were almost impossible to hack.

When talking about costs, we return again to the notion of delivering highly optimized, static content over a CDN - it simply costs less than traditional web servers. When we look closely at the costs of scaling up those web servers in times of increased load, the costs can add up quickly. Jamstack costs far less to host.

We often hear about technologies tested out by early adopters and then "crossing the chasm" into the mainstream. That is what we've seen from Jamstack: it has crossed the chasm and, because of the benefits it brings, gained popularity with the SMB and Enterprise markets.

Let's examine both types of organizations to see how they are taking advantage of the Jamstack.

Jamstack for Small to Medium Businesses

For the SMB market, Jamstack architecture represents an easier, cheaper, and faster architecture to build on.

Jamstack in the Enterprise represents the culmination of all the benefits that early adopters and the SMB market have realized over the last several years. Combined with the maturation of services that support the Jamstack ecosystem, it's no wonder that many enterprise-level organizations are flocking to this architecture.

By combining a Jamstack website with Headless CMS, enterprise organizations like yours can become more responsive, agile and secure.

You can often observe the success of your enterprise-level digital property by measuring your organization's ability to respond to change. Jamstack architectures help return that responsiveness to you through agile content workflows, faster time-to-market, and more reliable turnaround times.

Jamstack is a set of tools that work well together to comprise an overall architecture that works for you. Sometimes you'll find that you need to add new tools into your workflow. Other times you may want to swap existing tools out for ones that will work better for your business in its current state.

Utilizing the right tools for the job, such as marketing automation, ecommerce, CRM, or others, can make a big difference to your bottom line. In a Jamstack architecture, these tools are much more easily connected and replaced. The connectivity layers that allow these tools to talk to each other (known as APIs) have matured to the point where they can be considered interchangeable.

We can consider Netlify and Vercel to be pioneer platforms in the Jamstack space. They have expanded their offerings to include enterprise service-level agreements, performance and support packages to help you get onboarded quickly.

Azure, AWS and Google Cloud are also expanding their offerings to include Jamstack architecture, ensuring you can maintain your current levels of compliance with whatever cloud provider you choose.

Moving hand in hand with the Enterprise Jamstack movement has been the same shift to Enterprise Headless CMS. Give your growing content teams the right CMS tools to empower them in the same way that developers have been by the Jamstack.

Using Jamstack, Headless CMS, e-Commerce, Personalization and APIs can be combined together into a powerful, flexible system. Composable DXP is the modern way to build fullstack solutions without paying 6 digits for features you don't need.

Learn more about Jamstack from our Blog:

Why Jamstack is great for SMB and Enterprise

Digital tools should be able to communicate easily, especially those that are based in the cloud.  Sadly, this...

Download
Benefits of Headless CMS vs a Traditional CMS

Benefits of Headless CMS vs a Traditional CMS